The number of Britons choosing to use contactless debit and credit cards to make payments has soared so that £1billion was spent in a single month for the first time, data shows today.

In November 2015, total spend using contactless hit £1.02billion – a 230 per cent boom on the same month last year, when spending using the technology amounted to £303million, statistics from the UK Cards Association show.

The figure is likely to be overshadowed by December’s spend as shoppers hit the high street for Christmas.

The industry body also found the average transaction value of a contactless payment increased to £8.03 in November, up from £7.72 in October, likely due to the payment limit increasing from £20 to £30 in September.

The huge rise has come as more people choose to make smaller purchases using contactless, but also after a relentless push from current account providers.

Most now send out replacement cards with contactless as standard, meaning more of us have them. 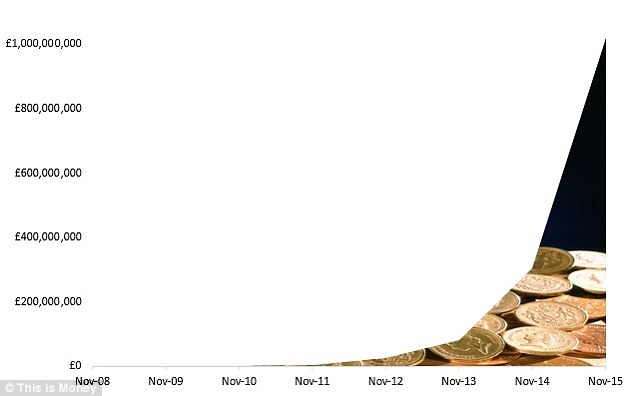 Rapid spike: How payments have increased in recent years on contactless credit and debit cards

According to UK Cards Association, more than 78million contactless cards were in issue in November 2015.

This is Money reported back in the summer of 2015 that those who do not want a contactless card can request not to have one, according to the banks we asked.

Some are worried about the security aspect after an investigation by Which? showed scanners can be used to swipe details.

However, last year, NatWest/RBS told This is Money that just 1,200 specifically asked not to have a contactless card out of nine million it had issued.

Richard Koch, head of policy at the UK Cards Association, said: ‘Spending on contactless cards has increased almost fourfold since the beginning of 2015 and for £1billion to be spent via contactless in a month is a major milestone.

‘Whether it’s buying lunch or paying for travel, there is a real appetite for contactless payments and this is only going to grow and grow.’

As a whole, total spending on payment cards in November 2015 reached £53.2billion, with the number of purchases at a monthly record of 1.174billion, with rises partly attributable to the impact of Black Friday and Cyber Monday.

Total online spending was £11.8billion, compared to £10.4billion in November 2014. The number of online purchases increased by 23 per cent year on year.